The night before my birthday we got a babysitter and hit the town. I sometimes forget how awesome life is with just two until three seems more awesome than five and I wonder what the two of us alone would be like…

I digress. Upon hitting the town, or rather just after we walked out the door, we did as all good married couples do and looked at each other and said, “Huh, what do you want to do?”

“I dunno, leaving the house was a good first step. You hungry?”

“Come to think of it, yeah. Did I eat yet today?” (That was me, if you couldn’t tell – the bottomless pit.) 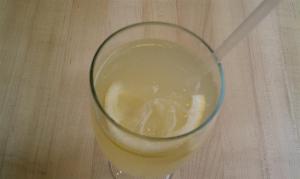 And then we ended up (after wandering around Trolley Square for 15 minutes) at Cafe Supernatural. Just FYI, so as to spare you the random phone call asking where they are – it’s on the west side, outside of the main building adjoining a yoga studio.  Cafe Supernatural is Chef Ian Brandt’s fourth plant-based venture, following after Sage’s Cafe, Vertical Diner, and Cali’s Natural Foods.

The atmosphere was pleasant, though it made me wish I was going to a yoga class as people came and went. It’s a walk-up and order, sit down and wait kind of place, nice enough without being too pretentious. The menu is relatively small, probably half cooked and half raw, but the brevity didn’t help me decide. So, after telling her I was starving and a nursing mom, upon the recommendation of the girl behind the counter for heartier options, we got the Machu Picchu and the Mesa Azul, and a ginger lemonade. We ordered our Machu Picchu with potatoes AND quinoa (I know, we’re rebels), just so we could try them both. From the menu:

Like any good food reviewer, we snapped a few shots with the phone. (Why do I always feel so dorky when doing this?) And we were about to eat when the girl behind the counter stopped by our table to mention that I shouldn’t eat the husk on the tamale. Come again? And she was dead serious, and I thought that was hilarious. She was sincerely concerned that I might try to eat the dry papery thing on the outside of sweet succulent goodness. Did it often happen that people tried to eat the husk and she hadn’t warned them and felt bad? Had they been sued? You laugh, but I went to law school and that’s not too far fetched. 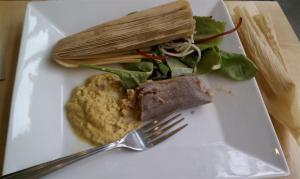 Anyway, back to the food. It was fantastical, delicioso, and marvelous – the kind of food that just feels good to eat. But, it had the same problem that Omar’s had, that I was still very, VERY hungry afterward. Two small tamales and a salad (both extremely delicious, mind you, and I would eat them again in a heartbeat) did not a sufficient meal make. Nor did a bit of quinoa, veggies, potatoes and a luscious cream sauce. I wish my meal had been 50% bigger. So, again, we found ourselves elsewhere – Whole Foods this time – looking for a second dinner.

I’ve heard that as we get older, our need to eat reduces (my neighbor told me that today), or maybe we’re supposed to order an appetizer and dessert too, or maybe I’m just so accustomed to “other” restaurant’s meals that I want MORE! Either way, I’ll still probably go back and order those tamales with that amazing mole again. I think about them in my sleep. 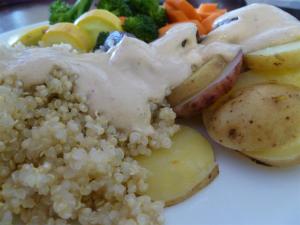 But, after what I did tonight, I probably won’t go back for the Machu Picchu, because I recreated it for a fraction of the price and I can eat until I’m full.  And it made enough to feed our new plant-based neighbors (score!). And it will go into the regular rotation because, even with my kids, I think it took me just over 30 minutes to make (plus cashew soaking time), everyone ate it and loved it, and it felt so, so good to eat.

Drain the cashews, tossing out the water. Place all ingredients in blender and rip until smooth. Cook over medium heat to thicken for a few minutes, stirring regularly or it will burn. Taste, adjust seasonings, and try to not to eat it all. I found that enough salt was the key to making it ever so amazing.

To serve: top cooked quinoa, vegetables and potatoes with cashew chili cream sauce and eat. And eat. And then as you’re putting it away, lick the spoon, scrape the bowl, etc. And you’ll still have enough for lots of leftovers.  Or for the neighbor that just moved here from another continent whose stuff hasn’t arrived yet and is hardcore plant-based. I am SO excited to get to know them.

Just trying to keep my edge with three kids, a minivan, a townhouse in suburbia, a community garden plot, a school in my house, and some ridiculous ideas. Once I went to culinary school, was a lawyer, got a degree in horticulture, was a make-up artist, and schlepped newspapers for cold-hard cash as a kid. I will never stop learning.

A constantly evolving home for good healthful living! A primarily plant-based approach, but the evolution is just that - evolving as needed. Right now, it's a more-plants-the-better kinda place, circumnavigating around my three wild kids, finding exercise zen, and sometimes random bits about the rest of our lives!

Some of our friends

It’s all in the past